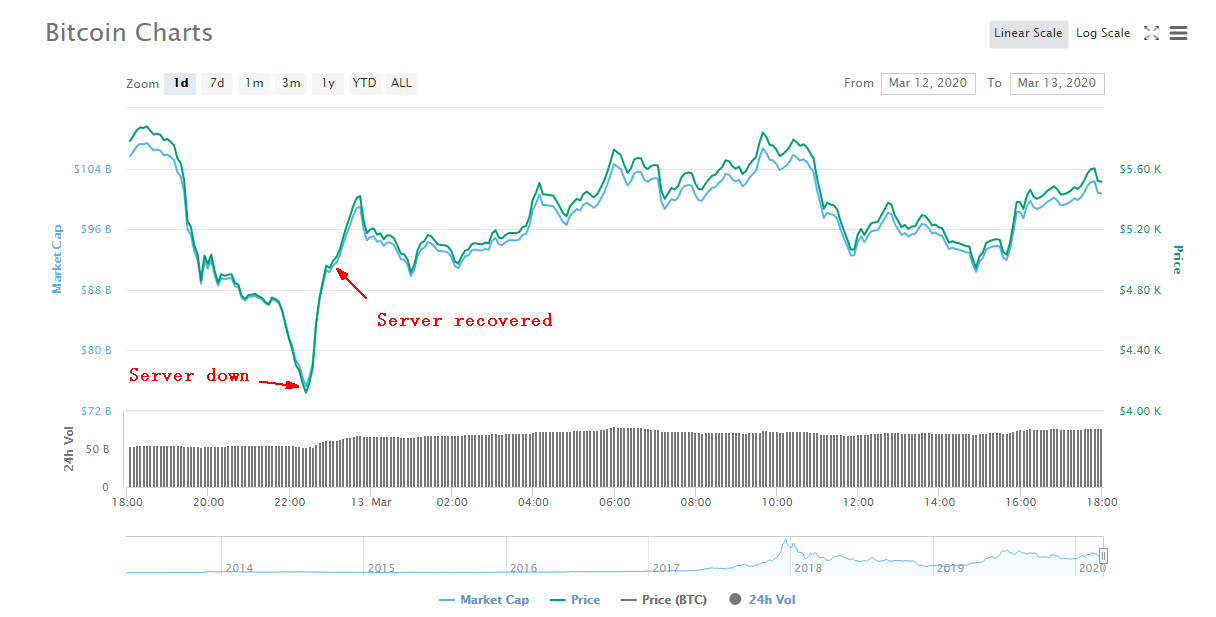 Emerging markets can be volatile. The price movement in BTC on March 12, 2020 recorded a historical 42% down in a single day, the largest in the last five years. We witnessed several huge deposits into, out of and among major exchanges including Binance, OKEx, BitMex, as well as huge USDT transfers. Some transfers came from early BTC miners from 2011–2012.

The market was clearly oversold at its daily low around 02:24 UTC, March 13. In the meantime BitMex ran into trade delays, which it later announced to be a brief cloud server downtime during 02:16–02:40 UTC, March 13. Their system resumed functioning after 03:00 UTC. In the next hour following the server downtime (02:16), BTC recovered some of the intraday loss, with a sharp 30% surge from the lowest point ($4000 to $5400).

Could these be just coincidence?

Maybe. Yet we’d like to talk about another interesting possibility, as there’s a lot we can learn from our history, and there is no new thing under the sun.

George Soros and his company once attacked British Pound, Thai Baht and Hongkong dollar in 1992 and 1997–1998. It was almost always the same strategy in every currency attack. Here is a simplified version of the principles. First, international speculators buy and/or borrow the local currency of the target country throughout offshore markets, stocks and bonds. When they accumulate enough currency in their hands, they start selling them to suppress the currency exchange rate. They will usually pick the time when there are rumors about the target country’s economy so investors will hold their money, as the timing is very important. People panic and sell together in a market lacking liquidity, long squeeze happens with large, forced liquidations in leveraged accounts, aggravating the sell pressure. Finally, when the currency devalues, the speculators repurchase the currency at a low price, and the difference between exchange rates minus an interest from the borrower is speculators’ profit. They also enlarged their profits by adding leverage and shorting stock index contracts beforehand.

When do such attacks or drawdowns happen?

When the currency in question — British Pound, Thai Baht, cannot sustain the exchange rate, and/or the fundamental prospects of the national economy are unclear. From a high level, it can happen when a Mundellian Trinity breaks into a trilemma — a currency can embrace only two vertices out of the three.

Let’s take Thai Baht for example. The Bank of Thailand announced that 9 domestic financial companies and 1 home loan company had low asset quality and insufficient liquidity on March 3, 1997. In the following month, Moody’s downgraded three major Thai banks’ long-term debt ratings from A2 to A3. Yet Thai Baht was fixed at a high exchange rate against USD and freely flowing across borders. This made the currency system susceptible, an easy time to produce panic and Herd Behavior, followed by oversell, enabling speculators to repurchase from a low price at mass scale.

The coronavirus outbreak has triggered turmoil across global markets — stocks, crude oil, healthcare and more. It’s a factor that impacts all financial markets, as the targets are the market participants themselves. That’s the reason why all markets were affected by a similar sentiment and into a similar direction. The timing is perfect.

Is the virus that bad?

Let’s look at the bright side, the silver lining around the clouds. It is similar to any other flu pandemic. When the summer comes and temperature rises, it will get better as the virus doesn’t endure long in a hot weather. And scientists have been working actively on the vaccine. The development cycle is usually months to a year, so most likely it won’t bother us anymore next year.

Some countries have been doing a good job taming the outbreak, including China and Singapore. It will stop soon as we take necessary measures to protect ourselves. Stay and work from home as much as possible. Wash hands often with sanitizer. Stock up enough food, 1–2 months at least. And keep in touch and stick with one another online — we are all here. Let’s stand hand in hand and get over it together!

What can a currency issuer or alliance do in defense?

In the case of a central currency issuer, such as the governments or central banks, they could raise the interest rate and increase the speculators’ cost to borrow. Though against the free market spirit, they could also utilize the national foreign exchange reserves (usually in USD) to buy back the target currency. So did the Thai and Hong Kong governments. In the end it depends on how much forex reserve the issuer has for emergent mobilization. The latter became the norm and widely practiced later with regional reserves union, which turned out to stop such attacks effectively.

In some extreme cases, a government with strong currency policy and central intervention can freeze national forex or even stock market exchanges, preventing the speculators from closing the trades and taking profits. The Hong Kong Stock Exchange did halt trading after 14:00 on 09/05/1998, exactly when speculators could’ve closed a profitable trade – the last window they could’ve exited the short orders with profit. Now, is the BitMex meltdown, a cloud server malfunction, truly a coincidence? Does this look familiar to you?

However, whether the BitMex server downtime was intentional remains unclear. Either way, the fact that the market recovered quickly during the server downtime indicates a possibility of ongoing whale attack with strong leverage in BitMex.

Bitcoin and many other cryptos are decentralized currencies without ongoing, dynamic monetary policy and macroeconomic control. All rules were written in code and preset upon issuance. However, it is possible that digital industry forms an alliance and takes measures like a central bank in extreme circumstances, merely targeting to stop vicious attacks as such, and protect all coin holders’ benefits. If such volatility recurs often, other honest crypto projects with effective macro measures may earn people’s trust, as they tend to be more robust and attack resistant. This calls for a knowledgeable crypto issuing team with a strong economics, finance, asset pricing and/or management background. Hayek’s theory on the free competition of currencies again plays a role here.

Be it an attack or not, what can a crypto holder do?

Stay away from any leverage, and maintain net positions in cryptos only. Move your coins to private wallets to make sure you are the only users of them, not the centralized exchanges or their partners. And always remember to invest only the money you can afford to lose. And perhaps this one as well — an intelligent investor sees opportunities in dips than risks.*

The fundamentals of Bitcoin remain strong. The digital currencies, especially Bitcoin has been acquiring massive users and public awareness over the last few years. The numbers of active addresses and transactions are approaching all-time-highs. There may be ups and downs in the short-term price, but the fundamentals will eventually manifest in the coin value. As Metcalfe’s law states, the value of a telecommunication network is proportional to the square of the number of connected users of the system (n²). And remember, Bitcoin halving is coming, which was usually followed by a strong, bullish market.

We are at the dawn of the consensus era, a paradise for ambitious adventurers, in particular primary market investors. This is still the wild wild west — early investors endure huge volatility, but with great risk comes great return. As time goes by, a moderately regulated crypto market will become one of the most vibrant emerging markets with excellent profits and increasing institutional interests. The road has twists and turns for sure, but the prospect is undoubtedly bright.

Crypto Commonwealth is a scientific publisher and asset manager that aims for the welfare of the most. It designs rich tokenomics for its publishing and investment ecosystem. The global COMM payment network endows all explorations of new knowledge with value, revolutionizing the value seeking processes in both industries with fair compensation. The team has a professional portfolio management team in conventional assets and cryptos. The publisher and fund operations as well as content and strategy mining promote diverse use cases for its natural tokens.